RIOT ROUND UP FOR OCTOBER

HomeLatest newsRIOT ROUND UP FOR OCTOBER 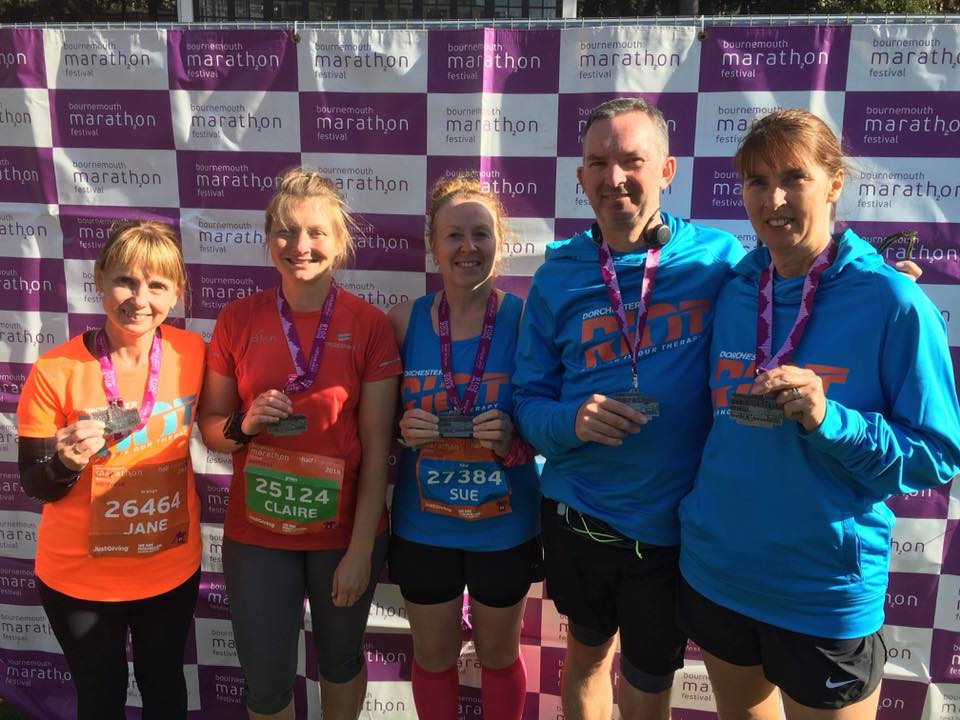 Here is our October update, to share news and just a small snippet of some of the events RIOT members have taken part in!

Not a half-hearted effort


The first weekend of October saw many RIOT members taking part in half marathons! Whether it was Salisbury or Bournemouth, your first or 100th, there were some amazing times and achievements over the course of the weekend. Big shout outs to Sue, Karen and Steve H our January c25k graduates who completed their first half marathons, we hope this is the first of many…! Congratulations to all that got PBs in the events, including Steve, Harry, Gunnleyg and Delia for their PBs at Salisbury and David F, Sally, Jane and Vikki for theirs at Bournemouth.


October brought many a 10 mile race, a nice distance, but still a tough one! 10 milers are especially hard when they are as hilly as The Stickler, a trail race where runners take on the ‘three peaks’ of Dorset, this event involves some tough uphills but also some spectacular views and fast downhill stretches to give the legs some time to recover, nice running by all. We also had RIOT members take on the locally organised Weymouth 10 (a lovely but deceptively hard seafront race which includes two loops up Bowleaze Hill) and the Great South Run, well done everyone, especially Mark S for taking 18 minutes off his last Weymouth 10 time and Danielle for hitting her sub 90 minute target at the Great South Run.


Thanks to Weymouth parkrun organisers for a successful pacing event on the last Saturday of the month. So many RIOT runners got PBs on this event that we do not have quite enough space to list them all, but a special shout out to Sam M who reached her sub 30 target, Rosie and Paula who both took off over a minute from their current PB, Kim M who ran the whole 5km full stop for the first time and Mark S who achieved his first sub 20. Also thanks to the pacers from all clubs including RIOT members; Carwyn, Delia, Mike H, Brian F, Darren G and Harry who helped others achieve a PB.


We couldn’t go through this blog without a big congratulations to Malcolm, who completed his 10th marathon in Amsterdam this month. Not only was it his 10th marathon, which is some achievement on its own, but he also got a marathon PB, finishing in 4hrs 4 minutes! What will number 11 bring….?

On that note, if you are doing a marathon in 2019, we’ve set up a group on Facebook where we can share mutual support and advice on things like equipment, nutrition and pacing. This will also be where the long slow runs are organised, do join the group if you wish to join us, you can find it linked on RIOT Group Chat.


In October we had our penultimate Time Trial (TT) of 2018, well done to Paul P who took 14 seconds off his previous 1km TT result! We wont be resetting times for 2019 but at our final TT of the year (December 6th), there will be all to play for with awards up for grabs for fastest male, female and biggest improvement (%). We also have seven runners who have attended every TT so far, they are in the running for a personalised RIOT running top, what more could you want for your festive running?

For those who haven’t yet taken part in the TT, it is a 1km loop which we time and then post members results. It is all about personal progress, only you know how you performed and what your target was/is, we are just the facilitators and try to help in any way we can. Thank you all for all your efforts and continued attendance, short term targets are key so please start thinking about what you want out of the final TT of the year.

RIOT Tourist of the month: With runs on a cruise ship near Italy and Menorca it was a busy month for RIOT Tourism, however it came down to the battle of the Marks. With Mark W taking RIOT 4765 miles to Oman he was a strong contender for the monthly accolade, however he was beaten by Mark A who took took RIOT a staggering 8187 miles to Mozambique!

Other Special Mentions: Elaine smashed her first triathlon at the Bustinskin Osprey tri, well done to all who completed it! Amy B represented RIOT in the junior 5km at Bournemouth Marathon Festival. Simon R finished the Studland Stampede in his target time, no mean feat when it involved running on sand! Ali took RIOT to Yorkshire for the Yorkshire Coast 10k. RIOT was well represented at the hilly Dorchester Dash 10k and last but not least well done to Anne, Jase and Bev who completed the beautiful but quad-burning Doddle West. As always thanks to all those that represented RIOT in events and at parkrun throughout the month.

October saw the launch of our new reflective RIOT long-sleeved tops for winter, being the bright RIOT orange we’ve come to know well, you can be sure they are certainly visible and perfect for layering for those dark winter runs, get on to the website and put in your order!

Not only did we launch a new top we also launched a new Thursday group (thanks Rosie for the name suggestion), we now have four groups running different distances and pace each week. We have also adjusted the time brackets slightly, if you are not sure what group to run in please come and chat to one of the run leaders before the run or see details of the distance and guide pace bracket (in minute miles) below:

May we also use this opportunity to remind you all to be visible for the winter runs (head torches, reflective clothing and bright colours) and courteous and aware of  other road, pavement and rugby club users.

Dates for the diary