HomeLatest newsJune RIOT Round Up

It’s been a quiet few months for the blogs as we have been busy recruiting a new Committee, drafting constitutions, writing Club Development Plans and preparing for our virtual AGM. With a new Committee in post we look forward to starting regular blogs again and over time improving communications generally through the club.  Despite the lack of blogs it has still busy few months for the Club and well done to everyone who was able to complete virtual events (such as Weymouth Half, Coast to Coast, Manchester Marathon, Bournemouth 10, Paris Marathon and Bath Half) during the early stages of lockdown.  Here is our round up for June with a few highlights that caught our eye, but well done to everyone who has got out and run, whether to take on a virtual race or for a social run, we know it’s not been easy for all to get back out there.

RIOT-ing our way through June 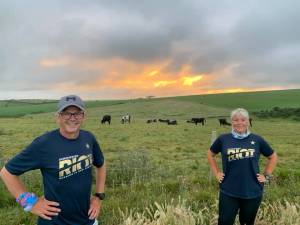 Hot on the heels of the RIOT Chaingang Challenge which resulted in Paul Danbury donning our infamous tooth costume on a run around Dorchester, the beginning of the month saw the completion of the first ever “RIOT Roulette” challenge.  Across two weeks, eight teams used a combination of skill and sheer luck to avoid elimination from the challenge masters Jo McDougal and Paul Danbury.  Well done to Team Six (Sam Mercer, Keith Horn, Paul Gardner, Emily Wiltshire and Rich Archer) for surviving each cull and being crowned the RIOT Roulette winners!  Special mentions go to Rich Archer for completing his longest run of 15 miles during the challenge, and also Andy Mutter who, in the lead up to the challenge, ran an impressive 100 miles in just one week for the Centurion Challenge, finishing with a marathon consisting not only of 24 x 1.1 mile loops but a tense scrabble battle at the end of each loop.

21st June 2020, the longest day of the year, saw the return of one of the club’s favourite events; Race the Sun where we ran in 30 minute slots as a relay from sunrise to sunset, though the sun appeared to be hiding for much of this years event! The RIOT Man and Woman of Steel, Malcolm Curtis and Shelley Carter, kick started the challenge with a sunrise run at Ringstead at 4:43am.  This was our biggest Race the Sun challenge yet and throughout the day 94 runners completed an impressive collective total of 270.18 miles!  The question is; can we beat it next year?

As if the Race the Sun challenge wasn’t enough, the summer solstice also saw a number of RIOTers taking part in the grueling Phoenix 24 challenge, running at least one mile on the hour, every hour, for 24 hours!  Not just physically tough this challenge required great mental strength to keep going during the night (and in the rain!) so a huge well done to everyone who took part, we hope you take pride in your weighty medal.

June brought with it the long-awaited return of our Thursday night club runs. In line with current government guidelines these were 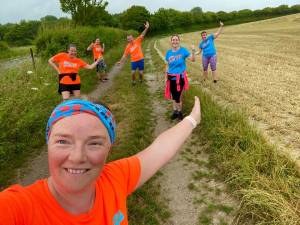 limited to groups of 6, but that certainly didn’t limit the enthusiasm of our members. Thanks to plenty of generous run leaders offering a great variety of routes, we were able to offer even more runs from the second week onwards, and members have enjoyed routes covering road and trail around Dorchester and further afield. The feedback from these smaller groups has been really positive, largely due to their ability to allow different members to cross paths and really focus on the social side of running and we will be considering whether these could play a role in future club runs, in addition we will now be complementing the Thursday runs with Tuesday hill and speed sessions! It’s not just group running which has started, we have also seen RIOTers going out on bikes, with two groups of six heading out to Moreton on a beginners cycle – led and tailed by more experienced members of the Club.

There has been a large number of achievements this month, which is especially remarkable considering the impact the coronavirus crisis has had on many.

Special mentions this month go to:

June hasn’t just seen running achievements, lots of RIOT have been out and completing some impressive distances on two wheels. Despite the Tour of Cambridge cycling event being cancelled, well done to the following members who still got out and completed 100 miles in the saddle: Christina Guppy, Delia Carr, Paul Pomeroy, Nicholas Guppy, Kirsty Eveleigh (who all achieved their first century), Matt Ings, Paula Fry and Martin Smith. Well done also to Dee Brooks who completed the mental challenge of 100 miles over 24 hours on the turbo trainer. There have also been lots of RIOT taking to the sea, nice swimming and running by all those competing in the aquathlon series and congratulations to Bella Lowis for completing her first virtual triathlon.

We look forward to seeing more of your achievements through July, please don’t forget to share them with us on the Facebook Group and Strava.

The club held a successful virtual AGM on 2nd July and more communications on this will follow soon.

Written by Christina Guppy and formatted by Rachel Jones 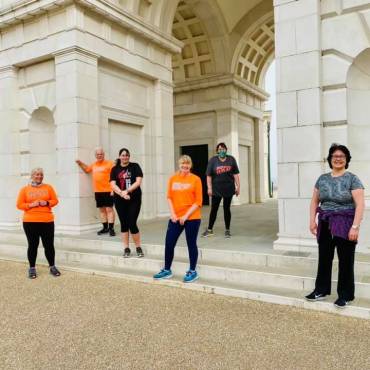