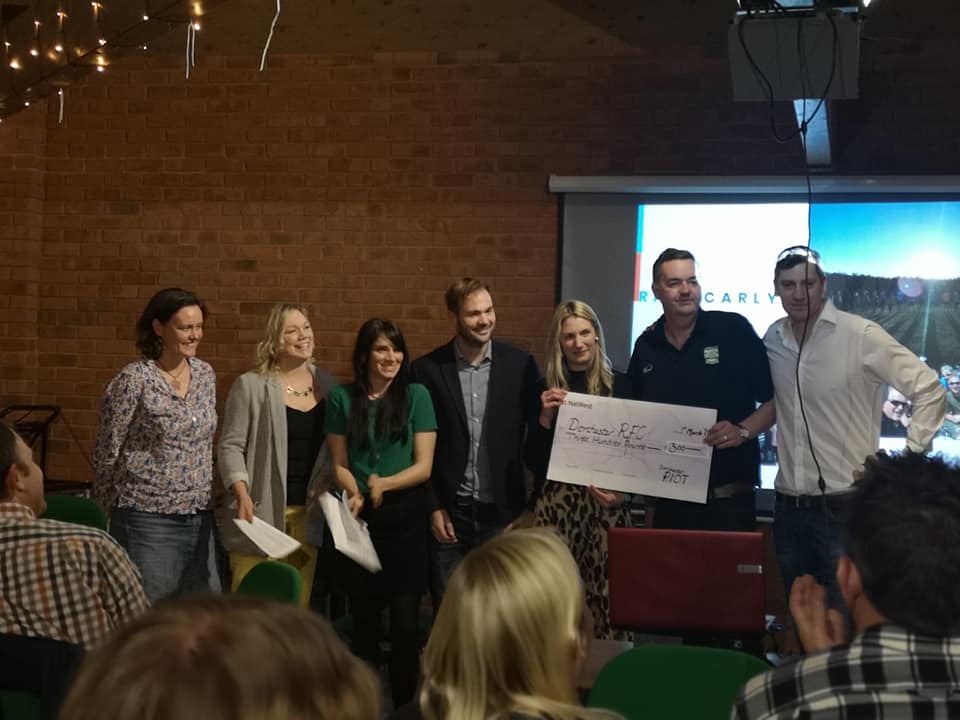 Friday 1st March saw RIOTers attend our awards ceremony, this was an extra special occasion as it was our very first event and the first opportunity we’ve had to really recognise the growth of the club, our runners and their achievements.  The night began with our first AGM, and details of this will be circulated by e-mail and posted on our website once we’ve had the chance to recover.

Firstly, we announced the results of our time trial with Scott C and Alex D taking crowns for the fastest  male and female fastest 1km TT times. Mark White and Rebecca Pearce both won most improved over three time trials and seven RIOTers received T-shirts for full attendance over the four time trials.

The TT announcements were followed with some Special Mentions and Main RIOT Awards.

Segment Hunter winner is Delia – Whether it is flat, hilly, trail or road, with over 50 crowns to her name no-one finds, and conquers, a Strava segment quite like Delia

Running Club Chat Queen is Rosie – Not only is Rosie a regular runner and cyclist she also finds the time to talk about it!  This award not to be undervalued in a such a social club, Rosie THE top contributor to our active Facebook group and also keeps that conversation flowing post-RIOT run at the bar.

RIOT Support Crew Winner is Sharon –Sunshine or rain, whenever you need some friendly support at a race, it is often likely you’ll spot Sharon in the crowd, her race attendance surpasses that of many of our members and we think she deserves to be recognised!

RIOT Tourist of the Year winner is Mark A – Though there are a number of contenders for this award, including Lyn, Gary and Gunnleyg we feel that Mark Allwood donning his RIOT T-shirt in Mozambique should take the top spot

BEST NEWCOMER: The member who in the opinion of the committee has in their first twelve months from joining the Club shown the most improvement in either running development or race performances

Special Mentions go to Kim Mockeridge who in her year of running determinedly tackled the Colmers Hill Challenge and completed the full festive 24 and  Nick Guppy, a RIOT c25k graduate progressing through 5-10km and who is now training for his first half marathon.

The winner,  since graduating from our first RIOT c25k course back in early 2018, has gone from strength to strength. From a parkrun regular they’ve progressed to 10km and are now training for their first half marathon. This person is also a valuable member of the run leader team, organising his own sessions and offering support to new c25k and Steady group runners.

MOST IMPROVED FEMALE: Member who in the opinion of the Committee has shown significant improvement in performance has been the most notable, based upon running development and, or race performances whilst representing the club

Special Mentions go to Wendy Britton, who has come on leaps and bounds, like a Mountain Goat, Wendy smashed Purbeck 16 and completed a solo marathon. Melanie Orchard who has progressed her distance from 10km to half marathon and now, in training for Brighton Marathon, Mel determinedly increases her distances gritting through the long training runs. We also mentioned Sarah Dunford a RIOT regular and a c25k graduate in 2017 who after completing many 10km runs is now training for the London Marathon

The winner, completed c25k in early 2018 and has shown significant improvements and consistency with her running, first completing the hilly Lions 10k followed by her then beating her PB at the Egdon Easy, she then continued her training which culminated in her smashing her first half marathon, Bournemouth, in under 2hours 15 minutes.

The most improved female award winner is Sue Thurston.

MOST IMPROVED MALE: Member who in the opinion of the Committee has shown significant improvement in performance has been the most notable, based upon running development and, or race performances whilst representing the club

Special Mentions go to Steve Stone, who is not only known for his support to the RIOT Speed group but the improvements over the year to his running cannot be under-estimated, 10km, half marathons and 10 mile PBs smashed… we look forward to seeing what he does for his second marathon in April. We also wanted to mention David Howell, David completed c25k by himself earlier in the year and his running has progressed in both speed and distance and resulted in him recently completing his longest distance run. Paul Pomeroy was also mentioned we have been pleased to see him be rewarded for his efforts, seeing him complete triathlons and his first marathon, the Hangers Hero a tough trail run!

The winner, has gone from the back of Stamina to leading the group and in that time improved in his running development, smashing both 10k and half marathon PBs.  He represents RIOT at tough trail events, such as The Beast but also represented RIOT the Dark Valley Half (where he got a PB) the day after flying back from Oman, where he ran 67.7 miles in 35 days of sweltering temperatures.

The most improved male award winner is Mark White.

MALE VET The male 40+ Member who in the opinion of the Committee has over the past year, has shown the most consistent performance, whilst representing the club & wearing club colours

No Honourable mentions for this subject such was the vote by the committee. He’s a man with the plan, consistently represents RIOT at races, supports the marathon training group, designs route and is also generous with his advice. We feel that his Amsterdam marathon, which he ran in just over four hours, deserves a special mention, firstly as an example of perfect pacing (a subject of which we know he is keen), but also he completed it in such a great time despite the training plan going out the window after a nasty injury.

The winner for the award for male vet is Malcolm Curtis.

FEMALE VET The female 40+ Member who in the opinion of the Committee has over the past year, has shown the most consistent performance, whilst representing the club & wearing club colours

Special Mentions go to  Sue Thompson who consistently represents RIOT from Dorchester half, to smashing Exeter half and parkrun, and if that wasn’t enough a number of 10km runs (and swims!) in between.  Debbie Wiltshire, who has impressed us with her long training runs and smashing her sub 30 parkrun target.

The winner,  has shown consistent performance over the last year, she attends a number of trail events and completed half a half marathon at the East Farm Frolic deluge, an event when many couldn’t. She also steps to volunteer and Marshall, engages in the the challenges we throw at her and offers her running expertise and leading skills to our steady and steadfast groups.

The winner for the award for female vet is Samantha Mercer.

Special Mentions go to Clare Bushnell, after a biking accident we were inspired by Clare’s determination to get back on the bike and complete the 46 mile RideLondon event. Delia Carr who has had many amazing events in the last year but we remain impressed by her great performance at Dorchester marathon, her first marathon event. Malcolm Curtis for his outstanding performance at Amsterdam Marathon.

The winners achievements are too long to list, but here are our standout ones, she conquered the mountains of Dorset by completing her first marathon at Giant Head to taking on the mountains of Wales at Man vs Mountain, a grueling race up Mt Snowdon. They have not only managed to excel in running events but also cycling, smashing the 100 mile Ride London, and even in combining her running and cycling with swimming at the Osprey tri. We look forward to seeing what 2019 brings for her.

The winner of performance of the year is Paula Fry.

Special Mentions go to Rosie Pomeroy who is a supportive member of the club and steady group, the lady that coined “SteadFAST” and came up with the idea to run to Munich (we’ll thank her later), her contributions have been largely unsung. We also wanted to mention The Hall’s, Karen and Steve, if there is a tail runner needed, you can guarantee they’ll do what they can to fill the gap. They have supported our running groups for months and we’d be lost (some of us literally) without them.

Rosie, won this special award as decided in secret by Amy and is a worthy winner, coming to RIOT initially to support her husband but fully embracing running along with the events and partaking in and supporting challenges along with being our running chat queen. We always remain inspired by this ladies determination and value the contribution she makes to the club.

CLUB MEMBER OF THE YEAR:

We outlined some of Mark’s running achievements earlier on but not only has he progressed in RIOT we also want to recognise his support to the club. He steps up to all challenges, volunteers himself to lead or tail stamina group and he also voluntarily tails Paul’s night runs… which is no mean feat in itself and deserves its own award.

The winner of club member of the year is Mark White.

MAN OF STEEL (As voted for by members)

If there is one person who quietly just gets on and smashes race after race and supports the club it this man. From completing C25k way back in 2017, he’s shown real determination in his running and cycling, smashing half marathons, 10k races and even embracing hill reps. In addition to this, we don’t think there is anyone else who has supported us, our runners, our c25k or volunteered at as many races to support RIOT as this man of steel has, truly your Man of Steel for RIOT 2018 is none other than:

WOMAN OF STEEL (As voted for by members)

This lady has shown grit and determination throughout the year and we can’t go through these awards without acknowledging what she has achieved. Firstly, smashing 12 marathons in 12 months, including some of the hilliest Dorset has to offer. In the year she has also conquered 100 miles of RideLondon, and by no means least smashed Ironman 70.3. In addition to this she she also turns up and supports our runners at many events and is a regular sight at many a RIOT finishing line. There is no greater recognition than being voted for by your friends and members of the club and therefore deservedly the 2018 Woman of Steel award goes to:

That wraps up the winners of our first ever awards ceremony. On behalf of the committee we would like to thank you all for giving us so much material for our first awards do, you all continue to make us laugh, surprise us, shock us and inspire us and make all the effort we put in worthwhile. We look forward to seeing what our next year brings!