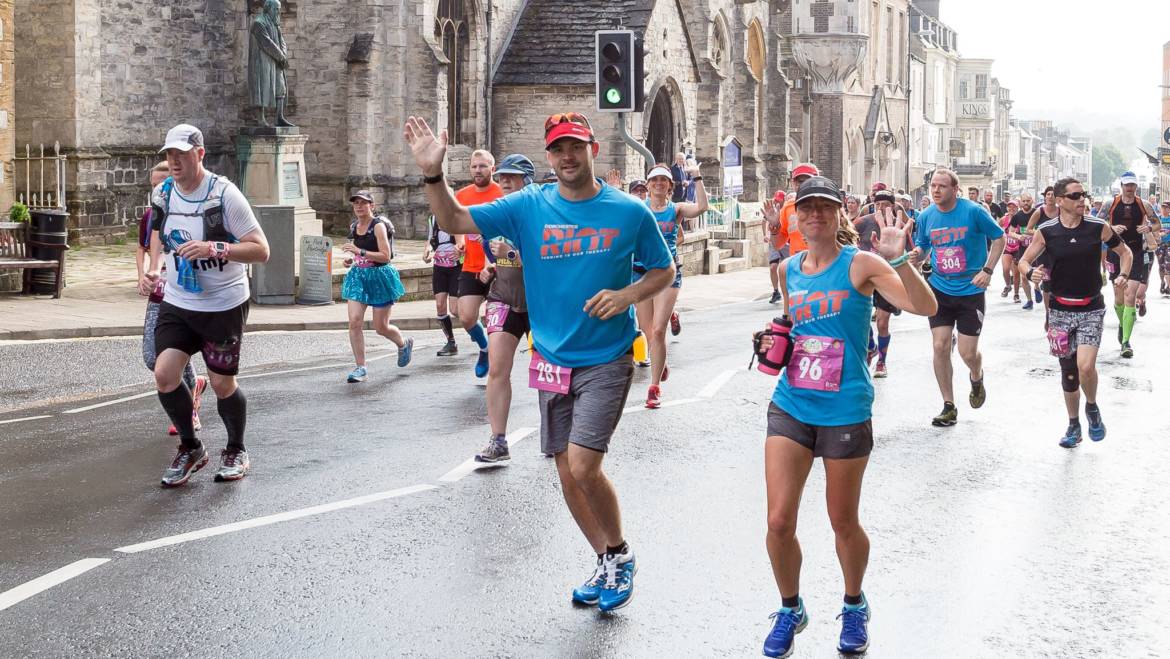 On Sunday the 27th May, over 40 RIOT runners battled the heat and hills to collectively run over 650 miles through the rural streets of Dorset, at what must have been our biggest club turnout to an event so far!

The Dorchester Marathon and Casterbridge Half is a collaboration between Dorchester Casterbridge Rotary and White Star Running and it raises funds for the air ambulance and other good causes.

Dorchester RIOT was proud to support the event, not only with runners but with bike marshals and our RIOT water station at mile 23 / 10, complete with pom poms, sponge hugs and morale boosting cheers when you needed them most.

With such a positive atmosphere from the word “go” it was bound to be a good event and it didn’t disappoint. The days highlights included; the picturesque route, running village, barn dance, local support, the cheering at the finish line and the friendly runners. However, we’ve picked a few of our personal highlights.

Firstly, it was amazing to see many of the 2017 Couch to 5k graduates smash their first half marathons (they didn’t even opt for a flat one!). This was something they had never thought possible a year ago. An extra special well done to Martin Ings, who not only completed his first half marathon but did this the day after his 60th birthday.

White Star Running are renowned for their medals and this event was no different, very impressive bling and well deserved after all the training. Well done to Janice, Delia and our committee members Matt and Rachel who were provided with an extra medal for completing their first ever marathon.

Whether you want a hug, kiss, hose down, gherkins or jelly beans, the White Star Running aid stations had it all. A team of RIOTers volunteered on the final water station of the race and Martyn Oliver has even had a special mention for his sponge hugs (we may need get them introduced at our summer club runs)

Last but not least, the runners, whether it was your first race or 100th, whether you were running it with a specific time goal, or to support a friend or partner. As a committee, we were so proud to see so many of our club come through that finish line with a smile on their face.

Thanks to Dorchester Casterbridge Rotary, White Star Running and the 300 + volunteers which made the event possible and we hope to have an even bigger turnout in 2019.